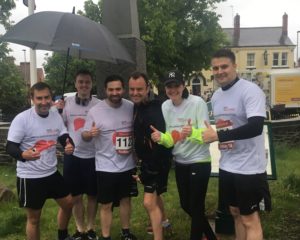 A team of dedicated runners from BHW Solicitors battled the pouring rain to complete the Rothley 10k and raise money for their chosen charity; the Leicester HPB Unit.

The 34th edition of the Rothley 10k took place on Tuesday 11th June. Participants, marshals, and spectators braved the conditions to put on another fabulous road race. Around 1000 competitors took part with the event itself raising money for LOROS, the Leicestershire & Rutland Hospice.

A team of six from BHW, including Partners Beverley Merrell, Steve McElhone and Paul Davis, took on the 10-kilometre course which weaved its way around Rothley village, raising over £300 for their own charity in the process.

BHW’s ‘chosen charity’ of the year, the Leicester HPB Unit, is based at the Leicester General Hospital and provides vital research into pancreas and liver cancer.