Right of Way or Right of Dismay! 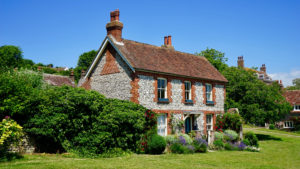 Most of us would expect to find a right of way over an area of land outside a property, in the form of a footpath or bridleway. For one unfortunate couple, they discovered a right of way running directly through their house!

Mr. and Mrs. Barret put their house on the market over a year ago, having no idea that the home they had resided in for over fifty years was subject to a right of way – a footpath running directly through their living room.

Soon after accepting their first offer, it became apparent that there was, in fact, a serious defect to the property’s title. As a result, lenders were not prepared to mortgage the property, and interested buyers were having to find alternative properties to purchase.  This left the Barrets’ unable to sell their home.

Prior to the house being built, a physical footpath was situated through what is now, the footprint of the Barrets’ home. The land was acquired by the council and built upon, some 70 years ago, with the intention of redirecting the footpath around the property’s exterior boundary.

However, due to an administrative error, the footpath was never officially diverted and so still officially runs through the Barrets’ property, according to the Land Registry’s plans of the area.

The retired couple are still trying to rectify the issue with the local council. Although the council acknowledges that this is an historic mistake made by not following the proper process to divert a footpath, the Barrets’ are obviously still unable to sell their home until the issue has been fully resolved.

The conclusion: although this is clearly a mistake, the consequences of making such a mistake and it not being discovered for so many years are plain to see.

The lesson: always check title registers and plans for boundary extents and rights of way, even through your living room!