The Law Commission has published a report in response to the Ministry of Justice and many legal professionals who have called for a clear statement of the law on the validity of electronic signatures.

The report sets out the Law Commission’s findings, which in summary states that electronic signatures are capable in law of being used to execute a document (including a deed) provided that:

Of course, this test does mean that not every electronic signature will be valid. The Law Commission considers these strands in detail, analysing the common law position and considering circumstances where the absence of the traditional “wet-ink” signature has, nevertheless, fulfilled the requirement for there to be an authenticating intention to sign and, therefore, why an electronic signature should be no different. In particular, the Law Commission gave the example of a signature at the end of an email as being sufficient in showing an intention to bind both parties in some cases.

Further reading: Is The Time Of ‘Pen to Paper’ Over?

The Law Commission also considered the existing law, namely the Electronic Identification and Trust Services Regulation (eIDAS), which provides that certain “qualified” electronic signatures are to be recognised across all member states. eIDAS is set to be incorporated into UK domestic law upon exit from the EU. The Law Commission explains that the UK will, therefore, continue to treat electronic signatures as capable of binding both parties as long as there is an authenticating intention and the relevant formalities are satisfied. 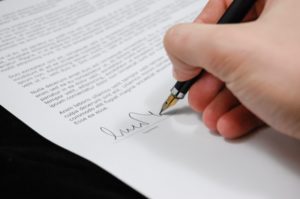 Of particular importance, the Law Commission considered electronic signatures in the context of deeds – legal documents which have more formality requirements as they must be witnessed and delivered as well as signed. The Law Commission has found that deeds are not capable of being witnessed “remotely” and, therefore, may only be validly executed electronically as long as the witness is physically present in accordance with the current law. It is here where the validity of electronic signatures seems to have become blurred and the Law Commission went on to discuss options for reform, for example, introducing the ability to witness a document via video link. The Law Commission also called for an overall review of the law of deeds as through its research it has been found that many respondents viewed the law as outdated.

In conclusion, the report portrays a modern interpretation of the law and has been well received by many businesses and governmental authorities who, as the report pointed out, are increasingly reliant on technology to function more efficiently.

However, despite the Law Commission’s findings, the validity of electronically executed deeds and wills (the latter were specifically excluded from the report) is still uncertain due to the complexities of such documents. For peace of mind, where circumstances allow it remains best practice for handwritten signatures to be used to ensure a legal document has been executed validly.