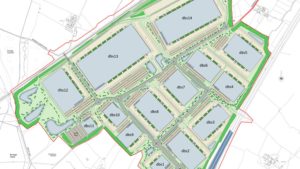 Recently, I received a letter from a real estate development company describing the proposals for one of the largest developments, if not the largest, in Leicestershire – the Hinckley Rail Freight Interchange.

The proposals are for an industrial, storage and distribution site for rail freight travelling through the middle of the UK. The site would provide a valuable link between the south and north, including important ports such as Liverpool, Southampton and Humber Estuary.

Proposals for the development site are between Hinckley and Leicester, next to the M69. There would also be the addition of a northbound off-slip and southbound on-slip to junction 2 of this motorway, near Sapcote. The site is substantial, with a current plot size of more than 500 acres. To put this in perspective, that is the size of Monaco. It would include around 850,000 square foot of storage and if planning is approved, would include the largest building in Leicestershire. Trains up to half a mile long will be able to stop at the site to unload goods.

Because the development is so large, it’s also outside of the Local Council’s control and has been deemed a “Nationally Significant Infrastructure Project”. This essentially means that there’s a much larger and thorough consultation process. Further, the final decision is ultimately made by the Secretary for Transport.

The site is anticipated to create around 8,400 new jobs for the region. Of course, concerns would be the environmental impact of the development and the need for roads and infrastructure to be updated. There is no denying a building of this size and associated infrastructure would significantly affect those living nearby.

It is worth noting that it is is very much only a proposal at this stage, with consultations taking place over the course of the next 2 years, allowing affected locals to have their say on the development. A decision is set to be made by 2020.

Full details regarding the plans for the Hinckley Rail Freight Interchange, including consultation event dates can be found on the official website: www.hinckleynrfi.co.uk.

Cameron Connolly is a Paralegal in the Commercial Property department. He can be contacted on 0116 402 7255 or email cameron.connolly@bhwsolicitors.com

Meet Our Trainee: Symrit Sidhu
Meet Our Trainee: Will Sperry
Civil Claims - What is Limitation?
Case Summary: Heads of Terms (HOTs) Do Not Create A Binding Contract
BHW Advises GP Partnerships in Successful Claim for Non-Payment