Bumblebees and the Rural Community 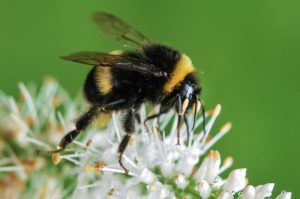 If you are one of the many people who love bumblebees, you might already know that they are suffering a steep decline in population. This is of particular concern to the rural community since bumblebees are significant pollinators of fruit, crops and wildflowers.

Indeed, around a third of crops worldwide are pollinated naturally by insects.  Pollination is essential to the fertilisation and reproduction of plants.  We wouldn’t want to be without strawberries, apples, tomatoes and pears, all of which are pollinated by bees. It used to be thought that domesticated honey bees were primarily responsible for pollination, but it is now known that wild bees and insects are crucial too. The role of the insect is essential in saving the rural economy money, which would otherwise be spent on hand crop pollination by humans or machines.

At the beginning of June, The European Commission proposed the first EU-wide initiative aimed at quantifying and supporting bees and other pollinating insects, such as moths, beetles and hoverflies. The EU Pollinators Initiative has the broad purpose of improving knowledge of decline, tackling that decline and raising awareness.  It is currently believed that the decrease in both numbers and diversification of species is a result of numerous causes, such as change of land use, pollution, invasive species and intensive agricultural management.   For example, maintenance of our hedgerows is very important for foraging bees, particularly now that perhaps 90% of the flowering meadows in the UK have vanished.

In terms of prevention, amongst other things, the EU Initiative will set out to ensure that currently authorised crop pesticides do not endanger pollinating insects.  Those pesticides that do have a harmful impact will be banned, or their use limited.  EU countries, including the UK, have already voted to ban the use of three types of neonicotinoid (nerve agent) pesticides which are a threat to bees. This was met with resistance amongst those in the farming community who are concerned about the result on effective crop yields without this resource. The NFU believes the EU is being over-precautionary and focusing on the hazard rather than the risk.  They would prefer to see a re-think of the regulation, given that even the European Commission has itself acknowledged the indispensable nature of pesticides in agriculture.

In the UK, the Great British Bee Count 2018, which is running until 30 June is a survey in which everyone can take part, run by Friends of the Earth. You can download a free app and learn how to identify different types of bee, as well as how to make your own outdoor environment more welcoming to bees. Look out for more bee-friendly rural planning and land management policies in the future. Spread the word to help raise awareness of how much we need these crucial pollinators!